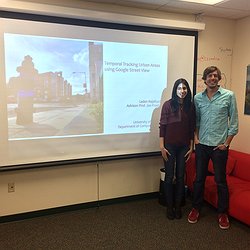 Congrats to Ladan Najafizadeh for passing her MS defense entitled "Temporal Tracking Urban Areas Using Google Street View." The abstract for her MS thesis is below.

Tracking the evolution of built environments is a challenging problem in computer vision due to the intrinsic complexity of urban scenes, as well as the dearth of temporal visual information from urban areas. Emerging technologies such as street view cars, provide massive amounts of high quality imagery data of urban environments at street-level (e.g., sidewalks, buildings, and aesthetics of streets). Such datasets are consistent with respect to space and time; hence, they could be a potential source for exploring the temporal changes transpiring in built environments. However, using street view images to detect temporal changes in urban scenes induces new challenges such as variation in illumination, camera pose, and appearance/disappearance of objects. In this thesis, we leverage Google Street View’s new feature, “time machine”, to track and label the temporal changes of built environments, specifically accessibility features (e.g., existence of curb-ramps, condition of sidewalks). The main contributions of this thesis are: (i) initial proof-of-concept automated method for tracking accessibility features through panorama images across time, (ii) a framework for processing and analyzing time series panoramas at scale, (iii) set of proposed new HCI labeling tools that leverage the time series properties, and (iv) a geo-temporal dataset including different types of accessibility features for the task of detection.

The Makeability Lab Stands in Solidarity with Black Lives Matter

We are experiencing a historic moment: a worldwide pandemic, record-breaking unemployment rates, glaringly anti-education and anti-immigration rhetoric and policies from the White House (link), and now, protests and rightful anger about the unjust death of George Floyd and the systemic racism that plagues the US. The Makeability Lab stands with the Black and African-American communities. We must all work together to combat the hate and racism and the social and economic injustices in our society. We must hold each other accountable—from our friends to our family members to our institutions. We must do more. As an educator, as a father, and as a human, I am morally obligated and emotionally bound to proactively fight for a better future and help positively shape society. I will use my privilege to fight.  Jon

Congratulations to Liang on being accepted to the DUB DC!

Liang He has been awarded a UW GPSS Travel Grant to attend CHI where he will present PneuFetch. Congrats Liang!

The Columbus, OH deployment of Project Sidewalk was just covered by the local ABC news station. The 2.5 minute segment (view it here) featured Dean Allemang, one of the lead volunteers of the Project Sidewalk Columbus deployment.

The Columbus, OH deployment of Project Sidewalk was just covered by the local ABC news station. The 2.5 minute segment (view it here) featured Dean Allemang, one of the lead volunteers of the Project Sidewalk Columbus deployment.

Both of our ASSETS'19 papers were nominated for 'Best Paper' at ASSETS'19:

Congrats to all authors!

The Makeability Lab Stands in Solidarity with Black Lives Matter